It was one of the annoying flights to Paris, late start, 'this is your captain speaking, please remain seated at all times as we're expecting heavy turbulence', arriving in Charles de Gaulle Airport (don't need to get in to that) and waiting 40 minutes to get a shitty car that never – even downhill with the wind coming from behind – would be able to violate any speeding regulations. So yes; I'm running late. By a few hours. I am en route to Reims where the Terres & Vins de Champagne group is having a get together in the vaulted cellars of the famous cathedral. The real tasting is not until tomorrow, but the Terres & Vins group is hosting a social event the day before as usual. On the highway, Aurélien is on the phone: 'Where are you?' 'On my way!' 'Okay, see you soon'. I stumble into the beautiful rooms that have a rather sacred ambience holding a light and delightfull buzz of people who have been spending the last couple of hours sipping champagne. I love that buzz and is truly happy to have finally arrived.
I am only halfway through the crowd saying hello to many good friends and acquaintances, doing les bises here and there as deemed appropriate in a situation like this and happily accepting the champagne glass someone is handling me, and then there's a sudden sound of someone clearing his throat in a microphone. Everybody turns to look at Benoît. He can on occasions be somewhat of a showman, but this time he and Alexandre are going to hand over the Terrea & Vins-prize as the group does every year to someone they believe has showed effort to promote growers champagne. Great ambassadors of Champagne such as Peter Liem and Jordi Melondo e.g.
As I hear the names Mia and Mads Rudolf, I am truly stunned. But mostly: Completely lacking words! It's a great and unexpected honour and I would have loved to explain how grateful I am and how important this is to Mia and me. And this is exactly why I dragged you all the way through delays, airplane turbulence, Charles de Gaulle Airport, car hiring and so on: I want to apologize for me looking sheepish, trying to say thanks a bunch in french, and for Mia not beeing there at all. Well. Therefore this writing. When I called Mia on the phone afterwards, she said, 'Oh how fantastic, did you remember to say this and that in your thank you-speech?' Well no, I did not... If my head had been a bit more clear, I would have put something like this together:

Terroir versus brand
Champagne is geographically a large area with considerable differences from region to region. Differences that, traditionally, have not been emphasized. As dedicated champagne enthusiasts, we've travelled the region and searched in many a book for any kind of information to enlighten us on this marvelous beverage. And in any book, we would generally get the explanation, that the vineyards of Champagne couldn't make complex wines, and that it would only be possible to achieve greatness in the wines by blending from most of the area. An explanation that not only didn't match the experiences we have had on our journeys to Champagne, but was in complete and utter contradiction to the reality that we had experienced through – and with – the growers, our friends, from all over the area. So what to do? In a way the answer is simple: rewrite the books. Or rather: Write your own book with the true, athentic story of the Champagne district.
That is what we tried to with our book from 2009 – The Champagne Bible. It tells the story of Champagne and champagne in eye sight with the growers and the vineyards behind the wines and not so much with the big merchants and famous brands and Châteaux of the region. In fact it is a main thesis in the book: That there is a thorough and quite important conflict between brand and terroir which goes back to the very early days of sparkling wines, and which has formed history and its events to this date. An analysis we indeed are proud of claiming as our contribution to the perception of the history of champagne. (Unfortunately still only available in Danish ... ). Yes, the controversy between merchants and growers does exist in all wine regions, but never put so much on the edge as in Champagne. Yes, there are general contradictions between brand and terroir, but champagne is exemplary to highlight and understand these differences.

Craftmanship and consciousness
Like in most of Western Europe, 20th century Champagne has been ruined with poor work, overuse of chemical (de-)solutions and a general decline in basic understandings of the work with soil and the vines. But there has also been more awareness towards greater knowledge of vinification processes. And first of all the area has turned from a poor region with fear of famines and disasters to a fairly rich area with a quite prosperous agriculture.
During the 15 or so years we've been working professionally with the people and wines of Champagne, there has been a growing awareness of the need to restore the craftmanships of the wine and the consciousness of the soil. To work sustainable and with pride. For us the Terres & Vins organisation proves this very clearly and is at the same time an inspiration to let it grow.

Past and future
We've been visiting Champagne before we even met eachother. (What Mia remembers best from her very first visit to Champagne is peeing at night in one of Pommery's vinyards). The beautiful cellars of Pommery, the impressive largeness of Moët and further on. We visited Billecart-Salmon, Leclerc-Briant and even Anselme Selosse whom then, in general and certainly also to us, was considered the state of art-exception to the rule that all great wines should come from assemblages made by the big houses. But it was Terres & Vins members to be, David and Pascal, that first showed us the real Champagne. Opened our eyes to the many different terroirs and expressions of the area. It was with other Terres & Vins members to be, like Françoise and Olivier, who made us realize how vast and diverse Champagne could be. We owe great gratitude to all the people who opened their doors and invited us into the cellar. And showed us around the vineyards while answering our more or less stupid questions.
When we started to travel frequently in Champagne some 15 years ago, it struck us that all the villages were very closed, with shutters in front of the windows and the gates just as closed. We met marvelous, generous people all over, but it seemed as though they didn't get along with their neighbours very well. Whereas Burgundy has its Grands Jours..., Languedoc/Rousillon ViniSud and Loire the Salon des Vins de la Loire, just to mention a few, Champagne seemed to us rather unable to cooperate. Could you borrow your neighbours tractor, we wondered. Could you do serious wine tasting together with competitors. No, we thought, no, not in Champagne. But that was before.

Nobel Prize
We did manage to find our humble ways to most of you on numerous travels and tastings. But bringing this all together in one organisation, in one tasting, with many different expressions, but with one united goal – to show the diversity of the true work with vines and wines within Champagne – that is a rather impressive task, and we are very thankful for you to accomplish that.
Times have changed. Champagne experts and authors of classic books on champagne now feel it's necessary to embrace the growers and even claim to have discovered the potential of the récoltant-champagne. So be it. We all know that the truth is elsewhere to be found. To reveal the potential of Champagne is a tough and dirty work that starts in the vineyard. But it is a significant change in the view of the growers, and for that you, the hard working and true vignerons of Champagne, can praise yourselves.

To receive the Terres & Vins prize is a great honour. It went by without any front pages back home in Denmark, but when people ask why we have this piece of barrel with our names on it, we explain that we won the Nobel Prize of Champagne. Nothing more, nothing less. And oh yes, we are proud of it! So thank you all very much. 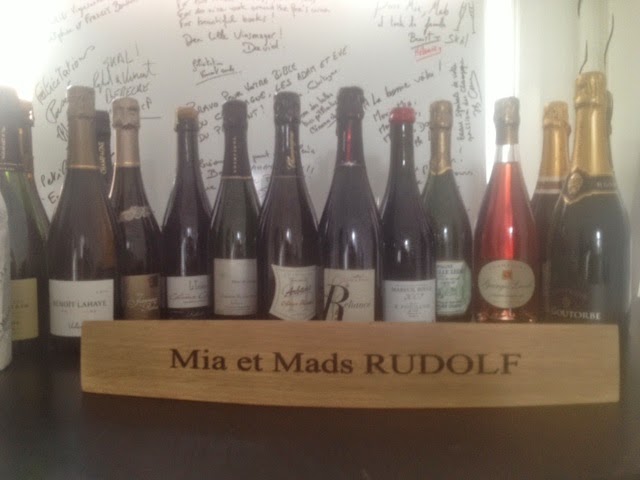 Ceci n'est pas une pibe! This is not just any piece of barrel, it's our Terres & Vins award
which we got in april 2013. Thank you Terres & Vins de Champagne, we are very proud.